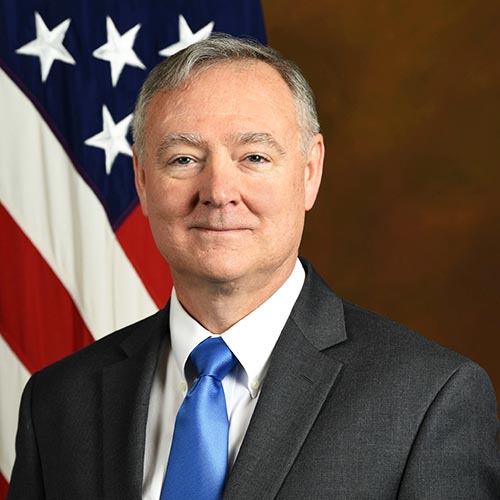 Dr. Joseph B. Evans is the inaugural Technical Director for 5G, reporting directly to the Under Secretary of Defense for Research and Engineering within the Office of the Secretary of Defense. Dr. Evans is responsible for coordinating 5G efforts across the Department of Defense, oversees and directs the Department's “5G to Next G” research and development portfolio, and advises the Under Secretary of Defense for Research and Engineering on 5G-related topics. Dr. Evans served as a Program Manager in the DARPA Strategic Technology Office from 2015 to 2019. While there, he started the SHARE (Secure Handhelds on Assured Resilient networks at the tactical Edge) and GC (Geospatial Cloud Analytics) programs, and managed the Mobile Hotspots, RadioMap, SSPARC (Shared Spectrum Access for Radar and Communications), CommEx (Communications Under Extreme RF Spectrum Conditions), WND (Wireless Network Defense), and DyNAMO (Dynamic Network Adaptation for Mission Optimization) programs.

From 1989 to 2019, Dr. Evans was a professor at the University of Kansas (KU) in Lawrence, Kansas, where his ultimate position was the Deane E. Ackers Distinguished Professor of Electrical Engineering & Computer Science. At KU, he also served in various administrative posts and led funded research programs in the areas of adaptive networking and communications systems, high speed network testbeds, rapidly deployable broadband wireless systems, and spectrum sharing technologies. Dr. Evans served as a Program Director in the Division of Computer and Network Systems, Directorate of Computer & Information Science & Engineering (CISE) at the National Science Foundation (NSF) from 2003 to 2005. At NSF, he was responsible for multi-organizational networking research efforts in wireless networking, cybersecurity, optical networking, and scientific applications. Dr. Evans was a co-founder and member of the Board of Directors of NetGames USA, Inc., a network gaming company acquired by Microsoft in 2000. Dr. Evans was a partner and Chief Scientist at Ascend Intelligence, LLC, which developed the Tactical Ground Reporting System (TIGR) for DARPA and the US Army, with large deployments in the Iraq and Afghanistan theatres of operation. Ascend Intelligence was acquired by General Dynamics in 2010.

Among other service activities, Dr. Evans served as a Council member for the Computing Community Consortium Council from 2012 to 2015, and as a Member-at-Large on the IEEE Communications Society Board of Governors from 2009 to 2011. Dr. Evans received the B.S.E.E. degree from Lafayette College in 1983, and the M.S.E., M.A., and Ph.D. degrees from Princeton University in 1984, 1986, and 1989, respectively. He is an IEEE Fellow.